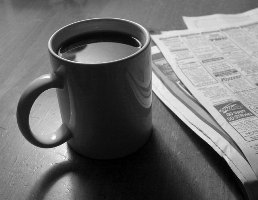 While the print news industry has been in decline for some time, and the Los Angeles Times have already cut back staff several times in the past year, online versions of newspapers are doing much better. Readers have shifted to online versions of newspapers as the total number of users online grows. Like I mentioned in my first blog post, the Web makes it easy for consumers to get information when they want. With the multitude of media competing for our attention along with new ways to get on-demand content, time shifting has occurred.

Blogs, radio, and TV might seem to divert readers away from online editions of newspapers… but that hasn’t been the case. Why?  I theorize that part of what makes news “worthy” of our attention is location. News that is local has more relevance to us than national or international news. Many bloggers and alternative newspapers are not local. You need men on the street to gather news in many cases. Another reason for online newspaper success is authority. People for most part trust large newspapers. They have research departments. They verify facts. Blogs and some online news channels can’t afford these luxuries. I think it also says something important to readers when the Los Angeles Times prints that they themselves are in serious trouble. From a journalism standpoint, they must report this. But would a blogger or independent news source report they were doing poorly?

So even if a shift has occurred from print to online, they principles of what makes great news articles still apply. Veracity. Authority. And what about style? Yes, style. Newspapers hire professionals. Writing is their job. Storytelling is their job. Bloggers oftentimes aren’t skilled writers. Anyone can comment on articles, but it takes skill to present information in ways readers enjoy.

In the stock market trading, they say the “trend is your friend” and “don’t fight the trend.” I see parallels here. The shift to online news, that has been in process in the past decade, will continue. The layoffs are evidence that the shift continues. They say stocks bottom when all the bad news has been factored in and everyone who wants to get out of stock has moved on to other investments. At some point in the future, falling print edition subscribers will level off. I expect once that happens, we will reach another point where print editions will stop all together because there will be too few people that will want a printed newspaper.

[UPDATE 5/7/2011: I was right! Newspapers have reincarnated. The iPad seems to have saved the industry. I didn’t think the iPad would be as popular as it is when it first came out. This is great news for writers and publishers. ]