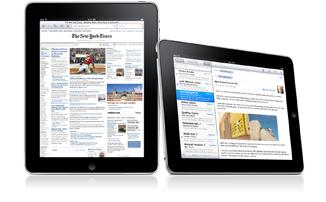 On August 28th, 2008, Bloomberg News accidentally published Steve Jobs’ obituary. Rumors resurfaced of his death in early 2009.  In April 2009 he had an emergency liver transplant. With this latest iPad product announced on January 27th, one has to wonder if we really did lose Steve.

Watching Jobs’ keynote address, I felt I was looking at a ghost. His presentation was slow, he lost the connection he usually has with his audience. When describing the features of the iPad, the audience wasn’t “ooing” and “ahhing” like with other products. The reason? Apple is known for innovation. Where was the innovative beef?

Intellectual capital is what Apple stockpiles. Investors often have a hard time valuing a company like Apple, because you can’t measure the value of ideas, but you can measure factory equipment, inventory, contracts. The iPad looks and operates like a large iPod or iPhone. It doesn’t run a real computer operating system like the full Mac OS X. It doesn’t appear its web browser runs Flash Web sites. It’s an incomplete Web browser. It’s video screen doesn’t stand upright, so it won’t be good for watching movies.  It won’t fit in your pocket, so it’s not really portable. It doesn’t have a real keyboard or powerful processor, so it won’t be able to be a machine you can work on. The only problem it solves for consumers is the problem of reading online. I don’t think that’s enough. I think the product will fail without something more.

The advertising copy for the iPad even sounds liberal, if not blatantly false. “Our most advanced technology in a magical and revolutionary device at an unbelievable price. Starting at $499” You can tell the copywriters really had to stretch it with this product. It’s kind of like selling home landline service now. Who really needs it, and people that need it probably already have it.

With a nice color screen, it will be an excellent eBook reader for sure, but it will be the most expensive eBook reader on the market. The hope for podcasters? Enough people who aren’t computer users will buy the iPad for its reading abilities, and then discover audiobooks and podcasts using the device. If, as a co-worker mentioned to me, it makes its way into vehicles as part of a media center, it will be another way to broaden the podcast audience. More devices that can play podcasts is clearly a good thing. But did the ecosystem of laptops and iPods/ iPhones need to be disturbed with the iPad? Let’s hope Steve Jobs can come back to life with better ideas.

UPDATE 1/7/2012 – I am writing this update from a borrowed iPad. A lot of things have changed. Steve Jobs is now dead. Apple is now on its 5th version of iOS. The iPad Safari browser is still buggy on iPad, but improving nicely. I am seeing more possibilities for the iPad as HTML 5 progresses and Web developers improve sites with responsive design. The battery life does seem impressive compared to my MacBook. With a retina display it might be worth a purchase.