It’s good to be in the Web space right now. My filtered inbox of jobs is stuffed with positions from all over the country. I received requests for 37 positions this past January vs. 3 in January 2010. Previous months during the last 6 years averaged 8.3 / month (with my resume in inactive states for a few years). This February was very strong as well, and the quality of jobs has improved significantly. There is a liquidity in the job market that just didn’t exist a few months ago. 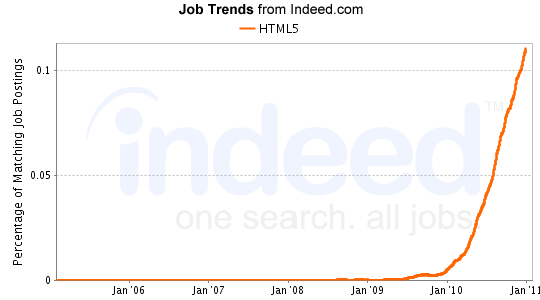 Healthcare and tech are the top industries now. According to job site indeed.com, HTML5 is the number one job trend right now.  Just look at this graph. Of course, I saw this trend coming in early 2010 and made KenMorico.com fully HTML5. I anticipated the meteoric rise in job postings and skill demand and prepped myself. It seems to be paying off.

You can see job trends and hiring conditions on this wonderful government site, the Bureau of Labor Statistics, part of the United States Department of Labor. There’s an important monthly jobs report the tells you the number of jobs created or lost along with other data. You can see useful industry-specific job trends in the private space on Indeed.com/jobtrends.

Recent years have been quite soft in demand due to the recession and “jobless recovery” in the earlier part of the 2000s. After the dotcom bust and 9/11, tech was hit hard. The maturing of the industry and boost from social media and mobile have re-energized the space, along with a now slow, but moving jobs recovery.

I remember when my career was just getting started in 1999/2000. I was receiving over 20 positions a day in my inbox. Many positions in no way was I qualified for. But recruiters needed bodies. I feel like this will happen again.

I often think what would have happened if I had taken a job in New York I heard about through a recruiter in 2000. At the time I was living in Connecticut near New York. The job was at the World Trade Center. The World Trade Center was a massive space. 50,000 people worked there. I moved to Los Angeles in early 2001. Sometimes you need to follow your gut when it comes to jobs. This time my gut tells me things are getting better and good times are back.