Want to buy a new iPad Air / iPad Pro and pay nothing for it? Kill your voice service. It’s possible — right now.

Are you wondering how much more you could accomplish on the road if you just used an iPad instead of just a phone or bulky computer? Are you a digital nomad or remote worker and just want the most lightweight solution with flexible calling features offered by Google Voice?

Phone plans can be expensive, especially post paid plans that tie you to a new device to reduce the cost. Like most things, data service plans are cheaper if you can pre-pay with cash upfront.

Can I use the iPad as a phone?

Yes, you can use the iPad as a phone to make real and regular calls while connected to Wifi with a third-party service like Google Voice or with a post-paid phone plan and “Add WiFi Calling For Other Devices” setting enabled on iPhone. The iPad doesn’t have the default Apple Phone app like iPhone (the bright green phone icon). You need separate apps or you can use FaceTime Audio to make calls to other Apple iPhone, iPad, and Mac users (though this limits the people you can call to Apple ecosystem users). It’s pretty cool to be able to make calls without iPhone. You have a fully capable device and no extra gear like a phone or another bill like a phone bill. Very Spartan, Stoic, and efficient. It won’t be for everyone though. Are you disciplined????

How do I use iPad as phone?

Simply open the Google Voice app and dial the number or use the built-in iOS Contacts App and click the phone icon for the contact you want to call.

Using an iPad as a phone will vary in cost. The cheapest method involves just using any available WiFi connection and using Google Voice or FaceTime Audio. If you have a post-paid phone plan, you can spend more for the convenience of using your cell phone plan with your iPad. I’ll explain in more detail below.

Next year, I’m thinking of ditching the iPhone and just carrying an iPad. The iPad Airs and Pros are much smaller and lighter than they used to be. Plus, if you do carry a laptop as well, you can now use the iPad as a second display (using Apple’s Sidecar feature)! Here’s how I plan to accomplish using an iPad as a phone / primary device:

New! The iPhone (iPhone 12 / 13) has a 6.1-inch screen and some landscape User Interface views not available on the smaller / older iPhones. If you are looking into getting an iPad it might be a viable alternative. The iPhone Max has a 6.7 inch screen, though the iPhone software isn’t optimized for multitasking which makes iPhones much less capable devices, no matter how large they get. It appears to be an Apple design philosophy at this point to sell more iPads… 🙂

Why do I want to use an iPad as a Phone?

With the introduction of iOS 8 iPads (and Macs) can make and receive calls through an available iPhone connection. If you want to keep your iPhone and just want calling features on the iPad, this is now available. It works great too. When you get a call on your iPhone, your iPad will also ring. You can talk through the mic on the iPad. You can also make calls using the Contacts app on the iPad. Pretty handy. You MUST be using Wifi for this to work.

If you have a post-paid phone plan you can use the “Add WiFi Calling For Other Devices” setting (under Cellular – > WiFi Calling setting in the iPhone settings app) to receive calls on your iPad without the phone being nearby.

Mid-size messenger bag… not great for everyday use… pretty bulky

I purchased a light vertical messenger bag and it’s perfect for carrying an iPad plus a few other things like business cards, earbuds, and a phone. You can see how much smaller it is compared to a normal / mid-size bag. The light vertical messenger bag has a nice durable canvas material (kind of like outdoor tent material) and in gray it’s really stylish with black accents. It also comes in black. Plus, it’s only $22. 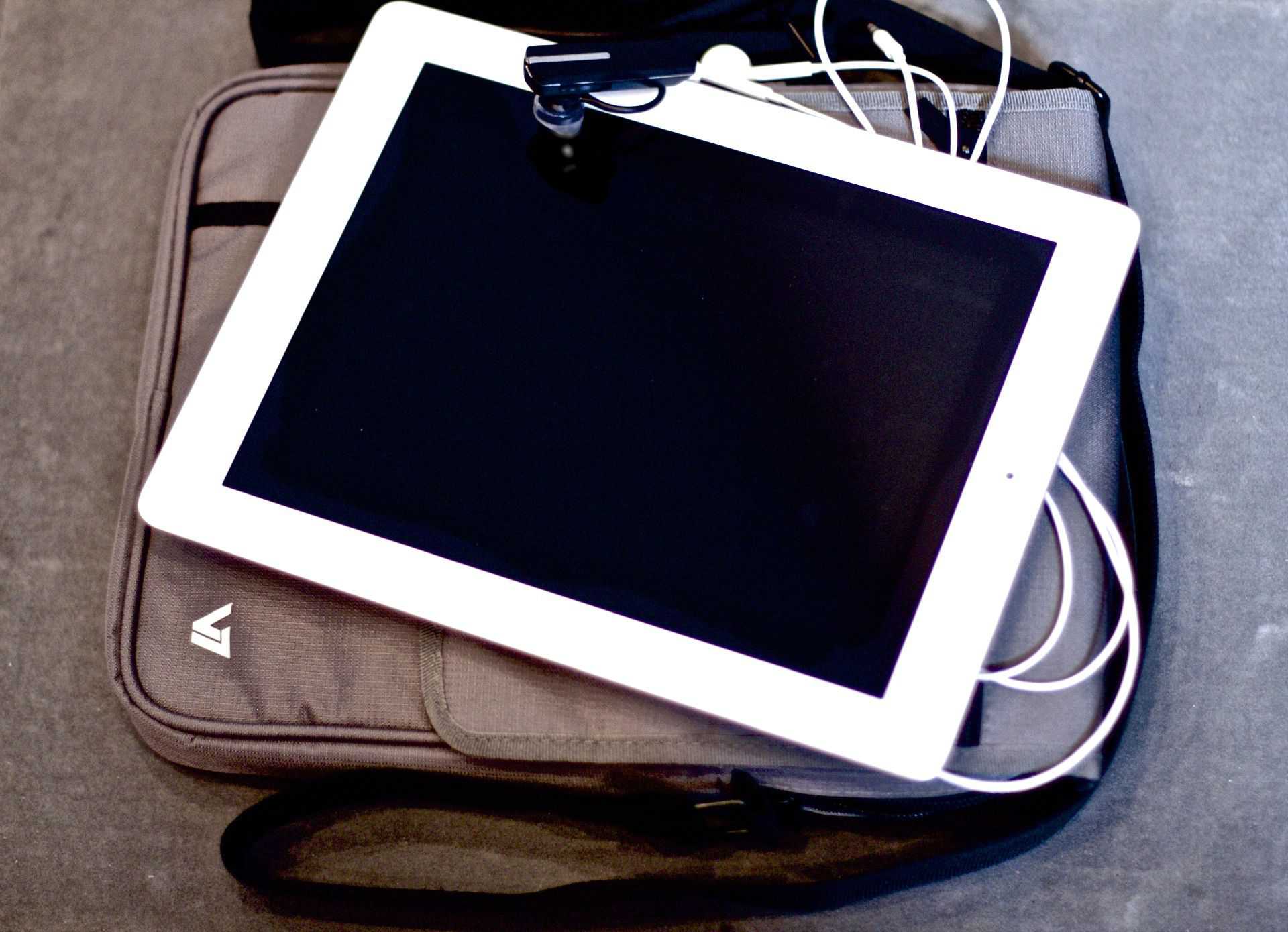 V7 Small vertical messenger bag for iPad is great for everyday use – light, not bulky

Removing the regular voice service should save me around $50 / month. This will pay for a new iPad Air just in the first year. Plus, the audio quality will be better using FaceTime Audio / Google Voice / Hangouts instead of cellular voice. Plus, iPads have much better battery life than iPhones.

Google Voice has some handy features like voicemail transcription and call & text message forwarding. It can send received text messages through email as well.

Disadvantages of Using iPad as iPhone

There are a few thing you lose, but I am willing to make some sacrifices.

What To Do With an Old iPhone?

IPhones have wifi built-in, so you can still make and receive calls using the Google Voice app. Also, you can activate the hotspot functionality on the iPad and take the iPhone with you when you go places. It should work within 30 feet or so of the iPad.

If you don’t want that old iPhone you could sell it on eBay, give it to a family member, or trade it in at a department store like Walmart, Target, or even the Apple store. I think retailers are getting smarter in their thinking that users want the latest tech and the old tech needs to be unloaded in a way that gives some value to existing customers.

The camera on the iPhone 7/8/X/11 is usually better than an iPad, so you may want to keep it around just as a camera. Plus, iPhones make pretty good iPods for night-time listening.

People have mentioned that you can make emergency calls with deactivated iPhones. You may want to see if this is the case and keep that old iPhone for 911 service.

Still Not Sure You Want to Use Your iPad as a Phone? New Options From AT&T

If all this seems like too much for you, AT&T is making it cheaper to keep your existing iPhone after your contract expires. Stiff competition is lowering costs a bit. Verizon also offers cheaper prepaid plans, as long as you own your device outright or pay for it in full. Prepaid service plans are the way to go in my opinion.

How much does it cost to use an iPad as a phone?

Using FaceTime audio for iOS devices is free. To call numbers in the U.S. is also free using Google Voice. Getting calls to your iPad from a number you share with your iPhone requires a post-paid phone plan when you are using your iPad away from your iPhone (for example, you go on vacation and decide not to take your iPhone).

How is the audio quality when using the iPad as a phone?

Since the calls go over data networks, if you have good stable internet connection the calls will sound excellent.

Can I use my iPad as phone with my phone SIM card?

Does the built-in iPad SIM card allow me to make calls?

No. It only allows data on the cellular network.

You can receive texts using third party apps like Google Voice. If your friends mostly use iMessage you can use that as your texting platform and use your email address as your ID / sent from Phone number. Also, if you have a post-paid phone plan you can use that to forward messages to your iPad.

Can I make an iPad a primary device / phone?

I think so. It takes a little work, but I think going minimal will help clear your mind and may help you focus.

Do you have any tricks for using an iPad?

To save the most money simply use WiFi and make calls to other contacts using FaceTime audio, as long as your contact also has a Mac / iOS device. That is the simplest and cheapest way. For regular calls, use Google Voice.

Want to Use an iPad as a Phone but Don’t Care About Cost?

If you have an iPhone and voice plan already and want to use the iPad as a phone, you can. Newer iPads can be configured to link to your phone number. So when someone calls your iPhone voice number, it will ring your iPad wherever you are. Not just on the same network. If cost is not an issue for you, this is the best option. Note that you won’t get voicemails – you need to call your voice number and use the keypad to get your voice messages. You can’t use this method on prepaid plans. It must be a post-paid plan.

If you have a post-paid phone plan you can use the “Add WiFi Calling For Other Devices” setting (under Cellular – > WiFi Calling setting in the iPhone settings app) to receive calls on your iPad without the phone being nearby.

Hear my audio commentary about using an iPad as a phone:

Using just an iPad with no phone plan can lighten the load on your mind. Fewer items to carry, and one less bill is very appealing. Stoicism for the win.

Using you iPad as a phone? Share your experience in the comments below and help others make the transition.

Entrepreneur Posts You Need to Read