You are here: Home / Marketing / SEO / Birthing a Blog: Why I Started Blogging

I didn’t pay much attention to blogging before because I thought it was a fad. It’s not. I’ve heard comparisons to a diary. It’s different than a diary. Blogs are timely, they can be syndicated, and can include images and videos. Wow. I realize physical newspapers and magazines have been dying for a long time. I know because I used to write for them. They just don’t make sense in these times. Asking people to pay for magazines or newspapers seems a stretch nowadays. On NBC’s New Year’s broadcast someone mentioned they were dropping their magazine subscription as part of their new year’s resolution.

With so many entertainment options available now, people aren’t held captive to print newspapers as their news source. The same goes for television. How many people rush home to see the 6 o’clock news? How many people get home at 6 o’clock anymore? We can get news from so many channels now. I’m sure new channels are being invented as I write this. We’ve got Internet news sites from major newspapers, blogs, Television, streaming on demand video, radio, satellite radio, Internet radio, and of course as my old journalism professor used to say, “the dead tree edition.” Not to mention trying to pry people away from the Nintendo Wii and Playstation 3. This New York Times article discusses how the flow of traditional media has broken and how companies need to adapt in this new environment. 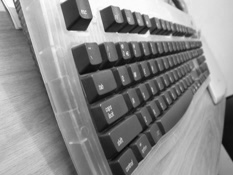 Part of the growth of blogs is due to the improvements in rich text editors on the Web. Traditionally, only Web developers could program the style markup necessary to make a Web page interesting. Same goes for adding graphics. Forget about video. The new breed of rich text editors from sites like WordPress.org and Yahoo! make styling text and adding images easy. You don’t need any special software to get the posts to the Web. The editors work just like Microsoft Word and other Word processors. I’ve just finished integrating a rich text editor into my employer’s Intranet site to allow our editor to post and edit articles for the external company newsletter. They used to print full-color editions every quarter. By the time the newsletter got into the hands of the clients the articles were not timely anymore. Posting a newsletter or Blog online allows fast and cheap production of content. This is great because more resources can be allocated to producing fascinating and timely content.

Blogging can be more lucrative for writers. Many people think equate the term “writer” or phrase “freelance writer” with being broke. In the recent past you be right. Professional writers working for a newspaper make around $35k. Plus they live in fear wondering if their newspaper will still be around or merged with a media conglomerate. Ah, but bloggers can make money on advertisements, merchandise, and speaking engagements. Probably the most famous blogger is Perez Hilton. His blog landed him on MTV. My friend Adam Bernard who operates a blog called “Adam’s World” made him an expert in a niche – Hip Hop journalism. He’s a full-time blogger / writer and doing very well. Of course like anything, you must be good at writing. With so much clutter on the Web, I would say you have to be unique and witty to stand out.

Web searchers are usually searching for something via Google when they arrive at a blog. That’s why niche blogging is so significant. Newspapers, while usually having a local slant, are general. They have many sections – world news, business, weather, entertainment, etc. When Web surfers Google a search phrase, it’s narrow, not broad. Like “how to make pizza dough.” Try finding that information in your local paper. Try finding it in .02 seconds. Thought so. Google’s a bit faster than your newspaper search. Once you arrive at an appropriate blog, you’ll usually find other articles about the same topic. AHHH, now a blog becomes an information resource.

I found an article about blogging that describes the general setup of a blog and how to start. While anyone can start a blog, not everyone has something to say or can say it well or with “sizzle.” Blogs can be for friends and family, however. They don’t all have to be for public viewing. In fact, blogging software allows posts you choose to be private.

Another thing that separates blogs from traditional media like newspapers is the ability to post comments. Blogs enable two-way conversations. Newspapers have letters to the editor sections. You’ll notice those section are very small, reference items several days old, and are very filtered to about two or three letters. Blogs can have unlimited comments and are rarely filtered. You get a more accurate read as to how people feel about a topic or article in a blog. The comments are usually posted immediately as well. Plus, commenter’s comments sometimes appear right under the blog post, making commenters /contributers mini-celebrities in their own way.

So with the birth of this new year comes this new blog. Now, isn’t that timely?

[UPDATE 5/7/2011: I can’t believe I’ve been blogging for over 2 years now. Amazing. It’s been a lot of fun. Best of all, it’s a great feeling to know you can pass along information that helps people develop themselves professionally. ]