You are here: Home / Entrepreneurship / Reflections from a Radio Man 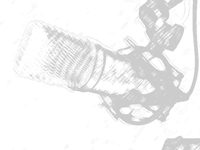 Note: this article was originally written on 5/8/2000. This was before podcasting, before satellite radio made it big, and before social media. His quote about using the computer (or “box” as he calls it) as just a tool and not the product is so relevant today given how easy it is for anyone to publish their own content.

Within Bill Rock Productions lies a part of broadcasting history. The racks of video and audiotapes consume walls. Pictures of Dick Clark, Don Imus, senators, and other famous personalities hang on the walls. In back, vintage audio equipment juxtaposes to digital audio equipment and a digital video editing station. This studio bridges the gap between the radio of the past and our ubiquitous digital future.

The heart and soul of this equipment is its operator, Bill Rock, an announcer and video producer 35 years in the business. Rock lives in Stratford, Conn. and runs his business from his home. You can hear Rock’s voice during interludes of NBC’s Nightly News weekends and Meet the Press, MS-NBC, CNBC, NBC Radio Shack Network, Sirius Satellite Radio, News 12 New Jersey. Rock recently narrated Discovery’s Summer of the Shark.

As a “voice” Rock works in the background of broadcasts aired every day.

Rock said that his business is a “young person’s business,” and many who enter leave by their 30s and 40s. Some go into management, and even fewer survive in the talent arena.

Rock has a truly distinctive voice. It’s deep, authoritative, and recognizable. He projects his voice to “print” (i.e. he can superimpose his voice like type over a photo) on the background sounds during promos. Many recognize his voice from radio and TV.

An audience hears Rock’s voice, but they have no idea what he looks like. When speaking with him, one gets a sense that they know him from somewhere, but because he’s never an NBC visual presence, he goes unnoticed walking around town. If he were on TV, you’d see a 6’2 dark-haired man, with round facial features, glasses, and groomed facial hair.

Starting out, he first got into the talent side of radio, and then stayed in management for a larger portion. He spent a lot of time as a program director, where his communications degree from Seton Hall University came into play. He learned a lot about business, which later gave him the background to start Bill Rock Productions.

Rock says he has an average voice, but by imitating and practicing, it has kept him in the business for 35 years. During the course of his career, Rock adopts a variety of styles to fit the format he works in. He drew part of his styles from some of his influences like Don Pardo of Saturday Night Live and Don Imus. Two of his greatest network announcing influences include Les Marshak of NBC and the late Ernie Anderson of ABC. Today, Rock borrows elements from Don LaFontaine, who announces most movie trailers and three major networks. By blending the affections of other announcers and his own, he has created a unique style that in all likelihood will also be imitated.

There is a market for a voice.

Rock is the only announcer in New York he knows of without an agent, and he prefers it that way. “I do my own negotiating and selling. Some salesmen are so good because they believe in what they are selling. I can sell myself because I believe in it [my work]. I can’t sell anything but myself.”

Rock is one of eight announcers NBC counts on, but he knows this can be a very good thing. “I’m a cog in a wheel, but in a way it’s nice because [NBC] is the largest wheel.”

Rock started his interest in radio when he was 17 at a 500-watt station (WERA – 1590 on the dial) doing Sunday morning news in Plainfield, New Jersey making $1 an hour. In college, he diversified with reading news and then becoming a station manager. “It was personal drive; wanting to expand. Not knowing it would come into play later. It made me valuable. I was a musician. I know how music works. All these interrelated hobbies turned into businesses.”

Rock worked his way up from reading the news to management. Rock was an operations manager at WELI in New Haven, but he felt unsatisfied. “I wasn’t making anything.” Rock admitted that the real reason for joining WELI was his hobby — boating. “They had a boat and I wanted to use it. That was reason enough.”

Rock’s changing roles kept him competitive. Rock moved from small, to medium, to large markets like from Albany, to Boston, to New York. He also made plenty of contacts that helped him early and later in his career. “Contacts are everything in this business. I still even have some from 35 years ago.”

Rock has seen many career changes, each of which has increased his skill set and contributed to making Bill Rock Productions work. Today, Rock is all business, but this wasn’t always the case. “When I was back in college, I wanted to have fun; I wanted to enjoy what I was doing. Like anything anybody does, if they enjoy doing it, it is self rewarding.”

Rock loves owning his own business. He sets his own hours and it gives him time to enjoy his hobbies during business hours. “I would never want to work for someone again. There’s nothing like being my own boss and creating your own world,” he said.

Starting his own business has given him a laboratory to diversify. Rock says he’s never bored. He works as a cameraman, video producer, writer, editor, announcer, on-air bit comedian, narrator, and more. Rock needs to have several skills to operate his business. Just some of them include audio mixing, lighting, editing, and more. With all the jobs Rock does, and the numerous skills he possesses, Bill Rock Productions remains “a one man show.”

Rock has won several awards for his video presentations, including Telly awards, Communicator awards, and he has even been inducted into the Seton Hall University hall of fame.

What gives Rock his distinctive edge is his talent and creativity. “It’s what I do with the [computer] box that sells me,” he said.

Rock reflected on his days in radio with fond memories. “Being on the radio is you; you’re a personality. I had more fun in radio than anything I ever did in my life.” But for now, announcing for NBC, Rock admits, “My voice is a product. I just manufacture something.”

Rock loved the spontaneity of radio and the promotions he was often involved in. The program manager at the time suggested Rock change his on-air name to Sean Grabowski, a Polish name, to appeal to the working-class population in Pittsburgh.

“We had this prize where I would come to a person’s house and cook a whole dinner for them, but I couldn’t cook so we had the promotions lady in back bringing in the food pre-cooked from her car to the kitchen as if I was making it. I thought somebody would catch me, but it went the whole night,” he said. “And these people had invited their neighbors, and they were saying, ‘Sean is cooking for us’ and I’m explaining that this is an old recipe from my grandmother. And this guy had Cuban cigars and he said, ‘Sean, I’ve been saving these for a very special occasion.’”

Another job in Boston found him bugging Watergate. “We sent a Volkswagen Bug to a cheesy motel called the Watergate in New Jersey.”

Update: Bill Rock now hosts “Elvis Goes Hollywood” on Sirius Radio as well as running his production company and keeping up with his NBC gigs.